Home » Power Tools » Saws » Sliding Vs. Non-Sliding Miter Saw – The Better One and Why

The miter saw family offers a range of saw options that lets you decide the kind of miter saw perfect for your work. Choosing may not be so tasking, but knowing what to choose is quite important.

Maybe you’ve been considering getting a miter saw, but you don’t just know exactly what to go for – sliding or non-sliding miter saw?

Do not fret buddy! We know you probably don’t have enough ample information about the two types of miter saw. But we’re glad to tell you that’s what you’re about to find out in this article.

What is a Sliding Miter Saw?

A sliding miter saw is yet another type of miter saw that allows the user to have cut up to 12” and 16”, as the blade moves backward as a result of a sliding mechanism built into the cutting machine.

It makes use of rails that lets the blade move back and forth from one side of a material to the other side.

Advantages of a Sliding Miter Saw

The major advantage associated with a sliding miter saw is the ability to cut across wider boards as compared to a non-sliding miter saw. For instance, a 10 inches sliding miter saw allows you to cut up to about 12 inches wide. This makes it more needful and useful for cabinetry works as standard cabinet uppers are usually 11 ½ inches.

Imagine how annoying it can be to have a half-inch left or short while cutting across a wide board and the only option you have is to flip it over to cut the remaining. A sliding miter saw allows you to cut through easily as it is designed to cut all across wide materials without having to flip over or reposition the workpiece.

Disadvantages of a Sliding Miter Saw

On the other hand, there are also downsides to sliding miter saws and the two major factors to consider here are portability and work or storage space.

Sliding miter saws are in no doubt bigger and consequently heavier as compared to non-sliding miter saws. Hence, they can be such a pain to move around. Technically, the sliders need more room to move back and forth as the blade cuts through the material. If your plan is to keep your miter saw in a permanent and wide space, you might not necessarily worry about this, and I guess you are fine.

Another thing is the cost. Sliding miter saws tend to be more expensive relative to non-sliding ones. Of course, if you know what you need it for and you’re ready to spend your money, then a sliding miter saw is a good investment and something worth putting your money into.

Single Bevel vs. Double Bevel Miter Saw: Which is Best For You? 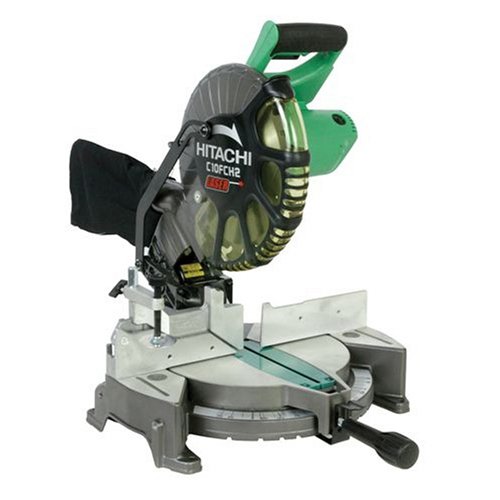 Hitachi, as a well-known brand has an excellent reputation for quality and for our sliding miter, saw recommendation, the Hitachi C10FCH2 emerges as our best pick among many others.

This powerful saw machine offers quite a several incredible features starting with its 24-tooth 10-inch tungsten carbide-tipped (TCT) saw blade which makes trimming and other woodworks on large materials easy.

This sliding miter saw also comes with an extended flip fence which can be raised to 4 inches to enable you to accurately cut through large workpieces measuring up to 2-5/16 inches high and 5-21/32 inches deep in size.

The built-in powerful 15-AMP motor is also something to write about as it can spin the blade at speed reaching up to 5,000 rotations per minute. This helps it to deliver incredibly smooth cuts.

What is a Non-sliding Miter Saw? 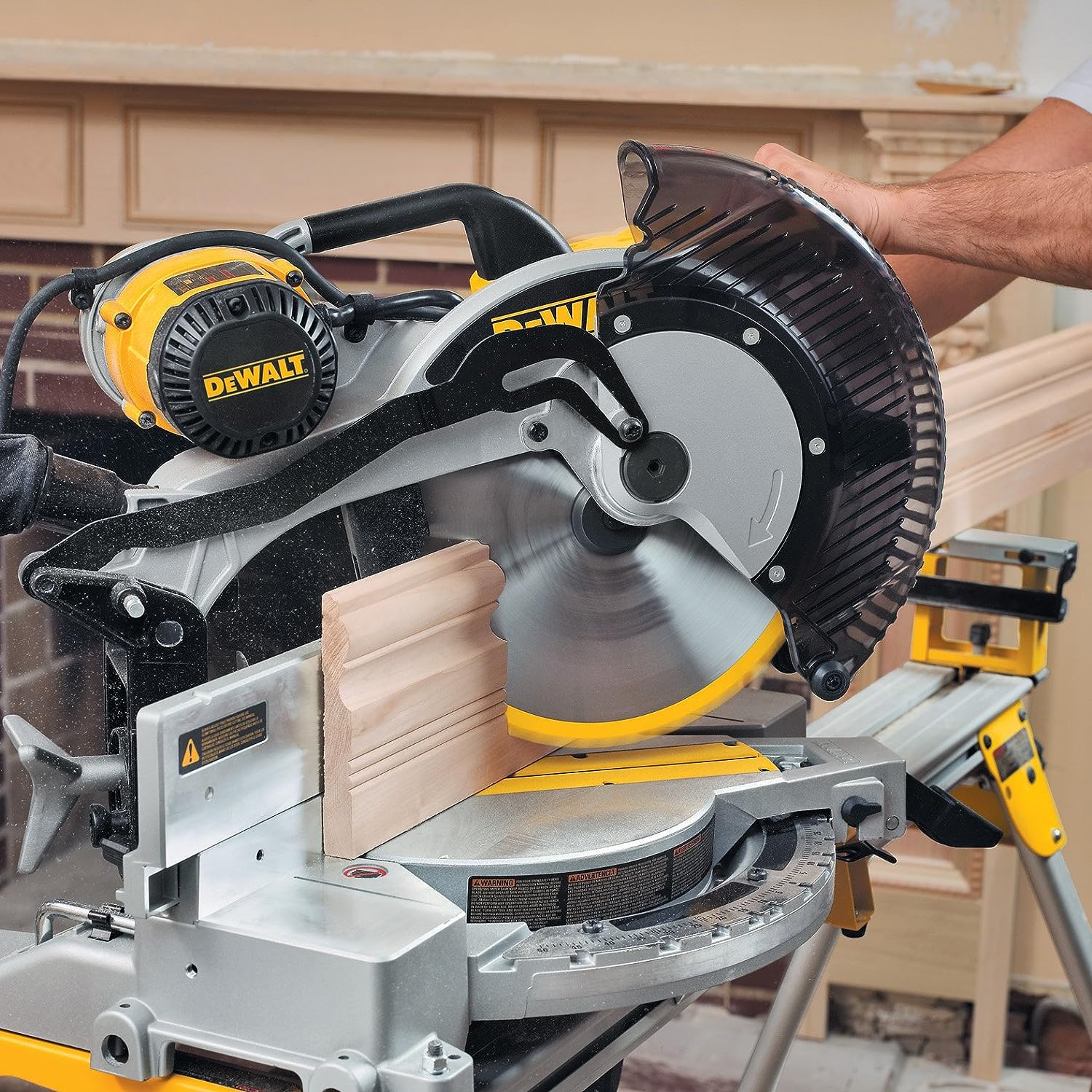 Non-sliding miter saws, sometimes referred to as compound miter saws, are the regular miter saws without slides for the blade to move forward and backward through the material being cut.

One downside to a non-sliding miter saw is if you have wider boards to work on, but you have to start repositioning your workpiece for the blade to cut through it.

Miter Saw Vs. Chop Saw – Which is Right for your Workshop?

The kit comes as a package that includes everything you would need for your work such as a socket wrench, carbide-tipped blade, two extension wings, and a dust bag.

It is designed to meet your expectation as it combines power and performance with the ease of use for a more productive and accurate result.

The Makita LS1221 is designed as a powerful miter saw to deliver nice and smooth cuts with better applications in projects such as framing, deck building, woodworking, and cabinetry.

Sliding or Non-sliding Miter Saw – Which One is Best? 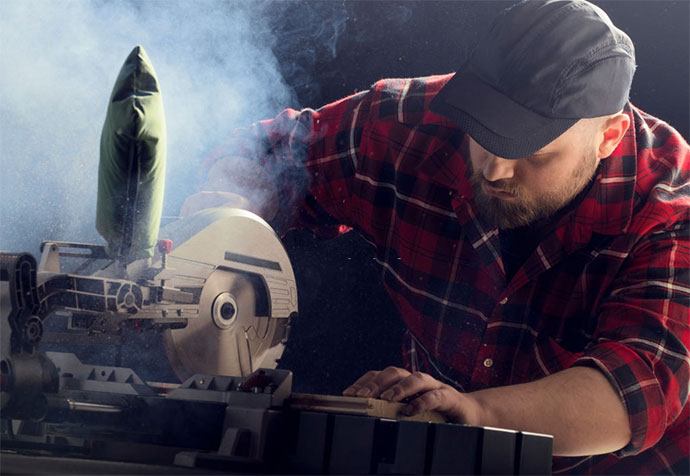 Having both options right before your face, it can be pretty difficult to decide which one is best for you until you know the kinds of projects you would be working on.

Not just for any other reason but because of the major difference between the two miter saws being discussed, which is the size of the material you want to cut.

Then, the very next thing to consider is your budget, which may be a major deciding factor. Typically, a high-end sliding miter saw is expensive than its non-sliding miter counterpart having the same quality.

You might want to consider getting a non-sliding miter saw, if your plan is to only work on projects that involve making frames for pictures, cutting baseboards and moldings to size. Otherwise, a sliding miter saw would be just a perfect choice for wider workpieces with quicker and accurate results.

Another thing to look into is your workspace.

As earlier said, sliding miter saws are relatively bigger and heavier, hence, requires enough space for more productivity. Basically, they are meant to be placed in a stable location. On the other hand, a non-sliding miter saw is easier to move around.

Perhaps, you enjoy moving your tool with you; then a non-sliding miter saw would be great because of portability and easy mobility.

How to Unlock a Miter Saw That 100% WORKING!

1. Is a Sliding Miter Saw Better?

Just as we have addressed earlier, it depends on what you’re doing. This model of miter saw can cut pieces that are wider than what a normal and regular saw can handle.

However, it also takes up quite a bit more space and is more expensive than most standard models. 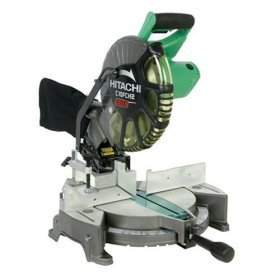 A model of this size can normally make a cut across a board that is five plus ½ inches wide.

Most models can also be bought in 12-inch versions, which can cut up to a maximum of 7 plus ½ inches – about the size of a 2 by 8.

Having examined the two options (sliding and non-sliding miter saws) carefully, there is apparently not much difference in their applications except for their modes of operation and this depends a whole lot on your desire and the works intended. So the basic question is, what task do you want the miter saw to do or tackle?

A miter saw as one of the many types of saws available is undoubtedly a must-have for serious contractors. However, it’s still left to you to make your decision depending on what you want, where, how, and why you want it.

We hope we’ve been able to help with that by providing you enough information and recommending for either of the two options.

So, we really hope you get the best!